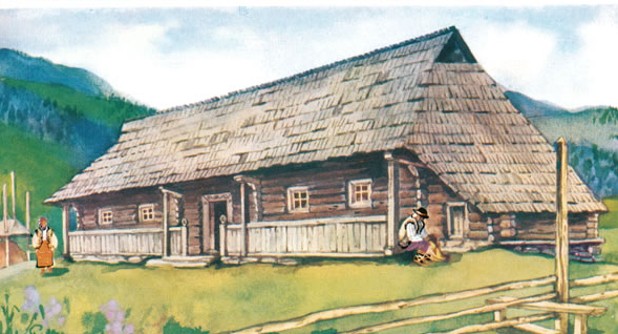 Hutsuls (Ukrainian: hutsuly). An ethnographic group of Ukrainian pastoral highlanders inhabiting the Hutsul regionin the Carpathian Mountains. According to K. Milewski and Józef Korzeniowski, the name hutsul was originally kochul (‘nomad,’ cf literary Ukrainian kochovyk), which became kotsul and then hotsul, and referred to inhabitants of Kyivan Rus’ who fled from the Mongol invasion into the Carpathian Mountains. Other scholars (eg, Ivan Vahylevych) believed that the name derives from a subtribe of the Cumans or Pechenegs—the ancient Turkic Utsians or Uzians—who fled from the Mongols into the mountains. S. Vytvytsky proposed that the name derives from Hetsylo, the brother of Prince Rostislav of Moravia, or from the name of a tribe allied with the Ostrogoths—the Horulians-Hutsians. Since the 19th century the most widely accepted view (held by Yakiv Holovatsky, Omelian Kaluzhniatsky, Omelian Ohonovsky, Ivan Krypiakevych, Volodymyr Hnatiuk, I. Pătruţ, and others) has been that the name comes from the Romanian word for brigand, hoţul/hoţ. The Soviet scholar Bronyslav Kobyliansky claimed that the Hutsuls are descended from the Slavic tribe of the Ulychians who resettled in the Carpathian Mountains. Based on the first written mention of the name (1816), Stefan Hrabec and Volodymyr Hrabovetsky believe the name is of recent origin and that it was originally a nickname given to the region’s inhabitants by the neighboring Boikos. 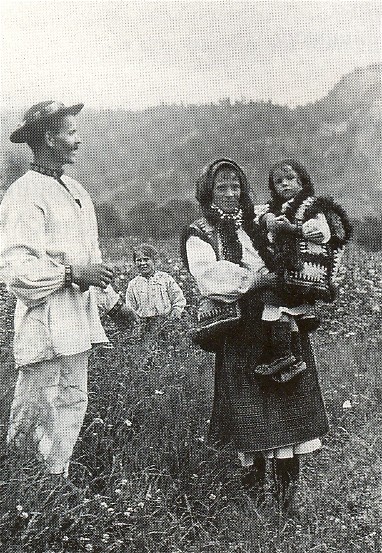 Archeological evidence of human existence in the region dates back 100,000 years. Certain localities (eg, Kosiv) were settled as early as the Neolithic Period (6,000–4,000 BC), and the so-called Carpathian kurhans excavated in the late 19th and early 20th centuries in river valleys around Kolomyiaand Kosiv revealed distinct evidence of the Dacian culture and the Cherniakhiv culture. The Slavic White Croatians inhabited the region in the first millennium AD; with the rise of Kyivan Rus’, they became vassals of the new state. Place-names in the region’s valleys—eg, Kniazhdvir on the Prut River, Kniazhe on the Cheremosh River, Kniazhyi Forest near Bereziv Vyzhnii, and Boiarske Pasture in Zelena—indicate that the region was settled during the period of Kyivan Rus’ and the Principality of Galicia-Volhynia (9th–13th centuries). References to salt mines in the region (‘Kolomyia salt’) are found in the Galician-Volhynian Chronicle, and the earliest recorded mention of a settlement there (1367) is that of the salt-mining center of Utoropy. Many other Hutsul settlements and monasteries are mentioned in charters and municipal and land documents beginning in the 15th century: eg, Bereziv (1412), Pystyn (1416), Kosiv (1424), Luh (1439), Pechenizhyn (1443), Kuty (1449), Vyzhnytsia (1450), and Pniv (1454). The population grew as increasingly more peasants fled into the mountains to escape serfdom, and by the mid-19th century there were over 100 Hutsul villages and 10 noble-owned towns in the region.

Although the overwhelmingly peasant Hutsuls came to be dominated and oppressed by Polish magnates and Hungarian nobles, a Ukrainian petty gentry arose in Bereziv. They and their peasant brethren took part in the Mukha rebellion against Poland (1490–2), and in 1509 and the 1530s they aided the Moldavians in their wars with the Poles. Local, spontaneous Hutsul peasant rebellions against noble oppression became recurring phenomena. Hutsuls are known to have participated in the Cossack-peasant rebellion led by Severyn Nalyvaiko, and Hutsul names have been found on the lists of registered Cossacks. Hutsuls also took part in the Cossack-Polish War of 1648–57, most notably in the uprising against the Poles in Pokutia led by Semen Vysochan in 1654 and the siege of the Polish castle in Pniv. From the mid-16th century to the 1870s bands of brigands called opryshoks, which came to play the role of avengers of the wrongs inflicted on the common people by the magnates and their agents, operated freely throughout the Hutsul region. 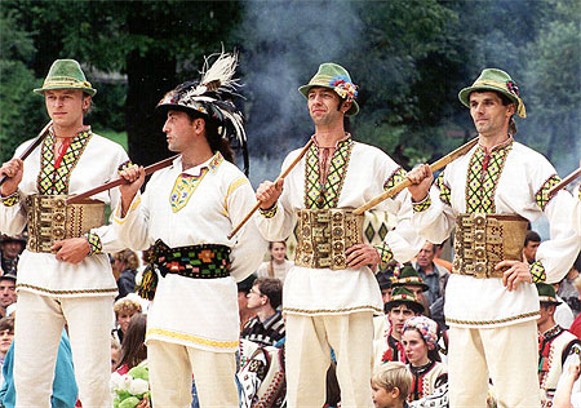 Under Austrian rule, numerous local Hutsul uprisings against the oppressive landowners continued; the most significant were those led or inspired by Lukiian Kobylytsia throughout the 1840s. Since the 19th century, the national awakening of the Hutsuls, like their history in general, has been conditioned by developments in Galicia, Bukovyna, and Transcarpathia, of which the Hutsul region is a part.

Literacy among the Hutsuls remained low until the 20th century; the first elementary school in the region was established only in 1816, in Pechenizhyn. The most significant growth of national consciousness among the Hutsuls occurred after the rise of the popular Ukrainian Radical party in Galicia and Bukovyna in the 1890s and the establishment of branches of the Sich physical-culture society (see Sich societies) in the Hutsul centers by Yu. Solomiichuk-Yuzenchuk in the 1900s. Many Hutsuls filled the ranks of the Ukrainian Sich Riflemen in 1914–15 and took part in the Ukrainian struggle for Independence (1917–20). On 7 January 1919 a Hutsul force drove the Hungarian garrison from Yasinia. With the aid of a company of Sich Riflemen, it occupied Sighetul Marmaţiei on 14–16 January, and on 5 February a Hutsul Republic was proclaimed in Transcarpathia. Its 4-man Ukrainian government and 42-member Hutsul Council were headed by Stepan Klochurak. The republic lasted until 11 June, when Romanian troops occupied the area. 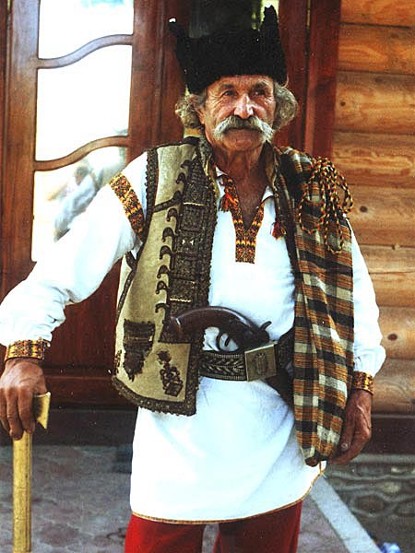 The Hutsuls are distinguished from other ethnographic groups in the Carpathian Mountains by their colorful, richly ornamented folk dress, which today is worn only on festive occasions. Outer garments of both sexes consist of a black or dark red coat (serdak), a linen blouse or shirt with multicolored embroidery or glass beads, and a short, sleeveless white sheepskin jacket (kozhushyna or kyptar) often ornamented with appliqués of leather, embroidery, and string, and mirror inlays. Men wear a broad-rimmed hat (krysania) decorated with colored string and plumes, a sheepskin hat in winter, a long shirt over narrow linen trousers, and a wide (remin) or narrow (cheres) belt with purses and brass ornamentation over the shirt. Women wear a wraparound skirt (zapaska or horbotka) and a headband (namitka) or colorful kerchief (khustka) . Footwear consists of leather moccasins laced above the ankle.

The Hutsuls are renowned for their artistic wood carving and inlaying of wooden objects with contrasting wood, brass, silver, bone, mother-of-pearl, and glass beads; their ceramics; their handmade jewelry, ornaments, and implements of brass, leather, and bone; their vibrant handwoven textiles and kilim weaving; and particularly their embroidery, Easter eggs, and distinctive wooden folk architecture. The churches in Vorokhta, Kniazhdvir, Kryvorivnia, Yasinia, Zelena, and Verbovets are fine examples of the Hutsul style. The Hutsul farmstead (grazhda) is also notable for its features. 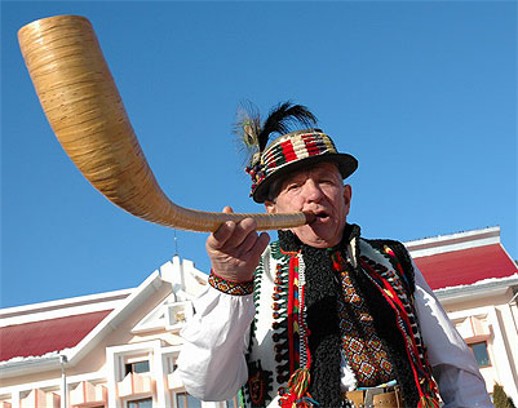 There are rich collections of Hutsul handicrafts and folk art in the Museum of Ethnography and Crafts in Lviv, the Chernivtsi Regional Museum, ethnographic museums in Uzhhorod, Vienna, and Budapest, and particularly the Kolomyia Museum of Hutsul Folk Art. 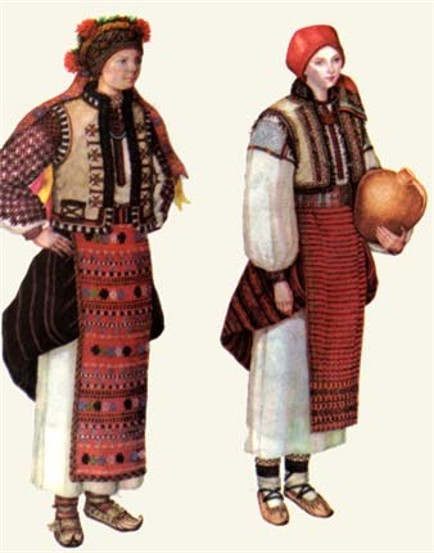 The Hutsuls’ rich folklore and folkways and the Hutsul dialect have been preserved to this century. They are not only recorded and described in scholarly studies, but are also depicted in the literary works of Yurii Fedkovych, Ivan Franko, Mykhailo Kotsiubynsky, Marko Cheremshyna, Hnat Khotkevych, Olha Kobylianska, and many other writers. The Hutsul folk tradition is rich in folk songs, many of which valorize the deeds of the opryshoks, particularly Oleksa Dovbush, and the Romanian popular rebel, G. Pintea. The Hutsuls also have distinctive folk music and folk dance. Their kolomyiky and troisti muzyky have gained popularity far beyond the Hutsul region. Since parts of the Hutsul region have a mixed Ukrainian-Romanian population, certain cultural features of the Romanian and other Balkan peoples are discernible among the Hutsuls. Their instrumental music, for example, is very rhythmic, like that of the Balkan region. The most popular Hutsul folk dances are the fast-paced hutsulka and, around Rakhiv, the trybushanka.

Hutsul immigrants in the West have established societies in Great Britain, Chicago, Philadelphia, Buffalo, Cleveland, Toronto, Oshawa, and Hamilton, which have occasionally held joint conferences and congresses and in 1985 federated in the Ukrainian World Consolidation of Hutzuls. The Chicago Chornohora society has published the journal Hutsuliia, edited by M. Domashevsky, who also directs the Hutsul Research Institute and has published two volumes of a history of the Hutsul region. 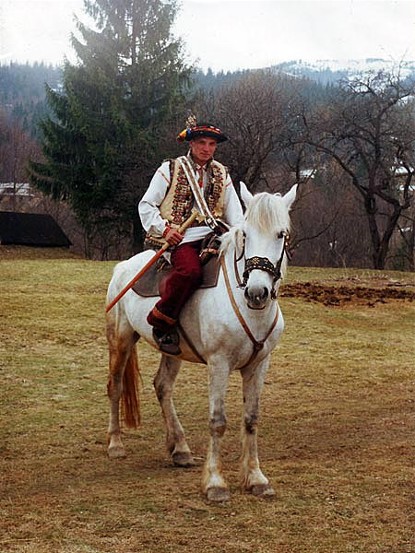 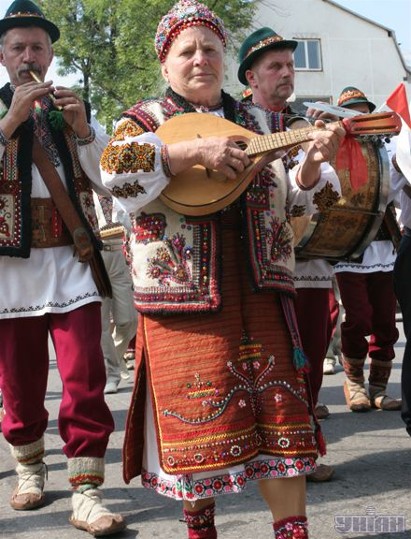 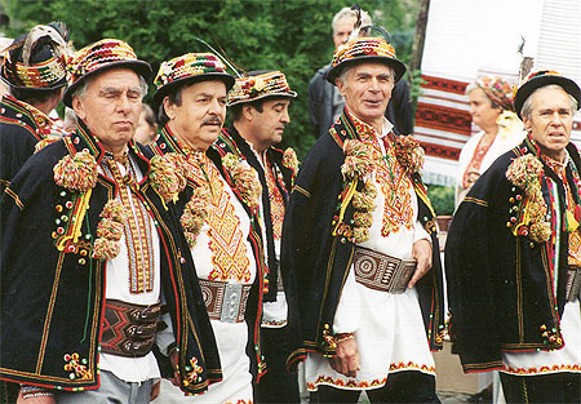 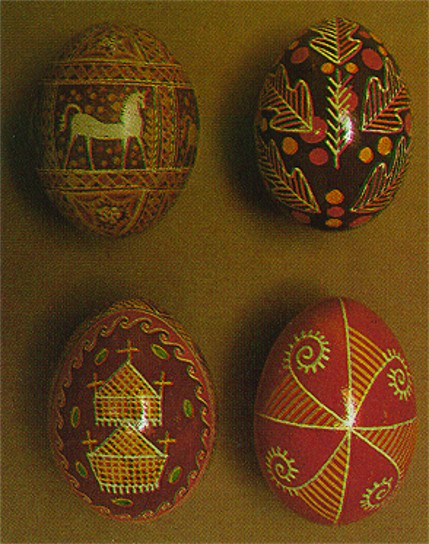 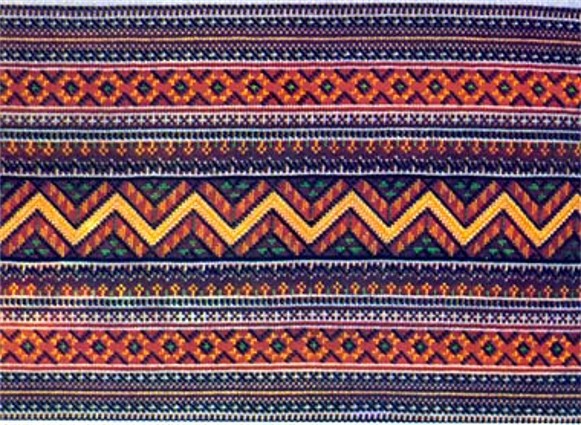