Головна Articles A brief history of corruption in Ukraine: the Kuchma era

A red director prepares the ground for crony capitalism. Part 2 in a series. 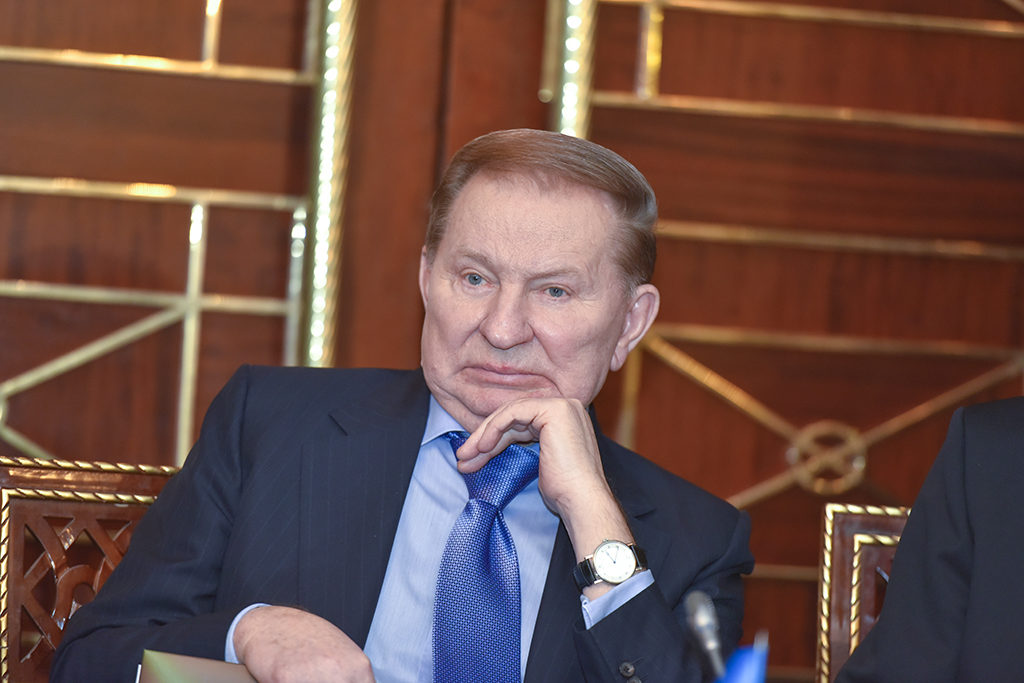 In the summer of 1998, up-and-coming political and business star Viktor Pinchuk had just moved to Kyiv from his native Dnipropetrovsk. Only 38, he already had led an extraordinary life: He had built an international steel pipes business, had begun buying up television stations, and was dating President Leonid Kuchma’s daughter.

For someone who had just relocated to the capital, Pinchuk held an impressive array of advisory titles and roles in the government. Yet even the most obsessed parliamentary correspondent had a hard time pointing him out in the crowd of new MPs. He was still an unknown figure to the public.

When I approached him for a profile I was writing, Pinchuk was polite, completely unwilling to talk, and had the audacity to ask me to ditch the story. The story ran the following week. Years later, he introduced me to a foreign dignitary as the first journalist to call him “an oligarch.”

The word was only beginning to gain currency at the time. Kuchma was approaching the end of his first term as president, and the whole phenomenon of oligarchy in the post-Soviet sense, or rule by a small economic and political elite, was in its infancy and still poorly understood in Ukraine.

But the creation of an oligarchic system appears to have been a conscious policy priority for Kuchma, a concept he trumpeted early and often. From his very first address to parliament as president in 1994, he insisted that Ukraine needed “financial industrial groups” to drive the transformation of Ukraine’s state-monopolized economy.

What he didn’t mention is that hand-picked people would have the opportunity to make fortunes on the privatization of Soviet enterprises, from the trade in gas and natural resources, and through other shadowy means.

For example, take one of Kuchma’s prime ministers in the late 1990s, Pavlo Lazarenko. He made a fortune in the gas trade. But soon after entering the ranks of Kuchma’s opponents, Lazarenko found himself a target of Ukrainian prosecutors, and he fled Ukraine in 1999. In the United States, where Lazarenko sought asylum, a federal court found him guilty of laundering at least $114 million and the former prime minister spent a few years in prison.

But Ukraine was yet to see its own billionaires enter politics.

Kuchma was elected president in 1994, just three years after Ukraine declared independence amid the Soviet Union’s collapse. Before that, he ran aerospace giant Yuzhmash in Dnipropetrovsk.

He witnessed first-hand the collapse of economic, technological and business ties with Russia, and the chaos that ensued.

The year before he took office was arguably the hardest for Ukraine, with inflation running over 10,000 percent, miners striking in the streets and people disillusioned with independence, which failed to bring the prosperity politicians had promised.

Kuchma, quick-tempered and down-to-earth, with the practical intellect of a communist-era factory boss, ran for the presidency on a pro-Russia platform, pledging that Ukraine would regain some of its former military and industrial might.

But instead of attempting to restore a command economy, Kuchma soon embarked on a big – and controversial – privatization scheme, a mass voucher program.

In 1995, every Ukrainian adult received a personalized “voucher” they could use to buy shares in state companies at special auctions. But instead of creating a new class of shareholders, the scheme backfired and created a black market for new securities.

Destitute and poorly informed, millions of people preferred to sell their paper vouchers for a nominal sum to private intermediaries, rather than become investors and expect a potential return at some unspecified time in the future.

The trade in vouchers was technically illegal – they were unique to each individual – but prosecutors turned a blind eye and a handful of people concentrated ownership in state companies, laying the foundation for some of the groups of future oligarchs. Ukraine’s voucher program piggy-backed on a similar process in neighboring Russia that also enriched a small group of political insiders close to then-president Boris Yeltsin.

Then came the big asset grab, which was to a large degree enabled by the parliament elected in 1998 – the one that brought Pinchuk and other business power brokers to Kyiv.

The list of parliamentarians reads like the yellow pages of Ukraine’s future oligarchy. There is Igor Bakai, the alleged mastermind behind Naftogaz Ukraine, an energy behemoth that for years was at the center of gas trading scandals.

There is Mykola Martynenko of Ukraine’s powerful nuclear energy sector who would eventually be investigated by Swiss, Czech and the Ukrainian authorities for bribery, fraud and money-laundering.

There is Kostyantyn Zhevago, who would make it to the Forbes billionaires list as Europe’s youngest billionaire, and, later, to the Ukrainian wanted list for alleged banking fraud. His ferrous metals business began under Kuchma with the privatization of an iron mine in Poltava. The mine later grew into his flagship company, Ferrexpo, which Zhevago took public in London in 2007.

There is Viktor Medvedchuk, the unsinkable grey cardinal, who would eventually become family to Vladimir Putin and play a key role in the Donbas war as a Ukrainian negotiator.

There is Oleksandr Volkov, Kuchma’s long-time ally and aide who, along with Pinchuk, assisted his 1999 re-election campaign. This was Ukraine’s first rigged election, according to the OSCE’s observation mission. The mission’s preliminary report found that Ukrainian authorities “failed to meet a number of OSCE commitments” to ensure a free and fair vote, specifically citing the lack of a “level-playing field for all candidates in the pre-election period.”

There are Oleksandr Zinchenko and Igor Pluzhnikov, creators of the Inter Media empire, which became instrumental in shaping the agenda in the country for many elections to come. In a Hollywood-style plot twist, Zinchenko was pushed out of his ownership by Pluzhnikov while fighting leukemia, and then Pluzhnikov died under mysterious circumstances in 2005.

The parliaments elected during Kuchma’s presidency in 1998 and 2004 probably had the highest concentration of future oligarchs. In later years, these members of the business elites often preferred to wield political power through proxies, using both individuals and parties, to advance their interests in the legislature and government. But under Kuchma, they personally pushed the buttons – quite literally – to adopt laws that directly benefited their businesses.

One textbook case of such a deal took place in 2004, just before the end of Kuchma’s second term. It only became public 11 years later, when court documents shed light on part of this complicated arrangement amid a lawsuit filed at London’s High Court. According to British media outlets, the case was one of the most expensive legal battles ever waged in the British courts.

In 2013, according to the court documents, Pinchuk, whose fortune was estimated at $3.8 billion by Forbes that year, sued two of his fellow billionaires, Gennadiy Bogolyubov and Igor Kolomoisky. He alleged that the duo breached an agreement by failing to place a major asset under his ownership. The asset in question was the Kryviy Rih Iron Ore Enrichment Plant, an ore mining company in Dnipropetrovsk region, which was privatized in 2004 for $130 million.

Pinchuk alleged that he had reached an agreement in July 2004 with Kolomoisky and Bogolyubov whereby they would purchase the plant on his behalf and transfer the stake to his company at a later date.

Pinchuk claimed the oral contract was made in the presence of three witnesses, including Ukraine’s richest man, Rinat Akhmetov, a month before Kryviy Rih was privatized. He also claimed to have deposited funds for its purchase and that the deposit was withdrawn, but that the shares were never transferred as supposedly promised.

After slinging mud at each other through their respective media outlets, Kolomoisky and Bogolyubov chose to settle with Pinchuk out of court, apparently handing him several sweet pieces of London real estate through a series of discreet offshore legal transactions, as documented by the Organized Crime and Corruption Reporting Project.

But the Kryviy Rih plant was part of a bigger story. It was a subsidiary of Ukrrudprom, a national holding of 10 iron ore plants that controlled about 70 percent of Ukraine’s iron ore market – used to make steel for cars, trains, construction and many other industries vital to the economy.

In 2004, a group of oligarchs allegedly struck an agreement to divvy up Ukrrudprom. The following year, Kuchma’s majority in parliament passed a law that favored this group in the privatization.

According to the London High Court documents, Akhmetov ended up buying five of the plants; Kolomoisky and Bogolyubov got three, including the relatively small Kryviy Rih facility they had allegedly promised to buy on Pinchuk’s behalf.

Pinchuk’s role was reportedly to mobilize political forces in parliament (including his own party) to secure passage of the legislation, as well as to ensure that his father-in-law, President Kuchma, signed it into law.

Parliamentarian Pavlo Rizanenko, who headed a special parliamentary investigation on the Ukrrudprom privatization a decade after the fact, said that Ukraine lost billions in the deal: “If we look at the real value of the assets of the holding [company] Ukrrudprom, in 2005, it amounted to about $20 billion. And this entire holding was purchased for as little as $400 million, due to the artificially limited competition,” OCCRP quoted him as saying.

Another case of suspicious privatization was that of the Kryvorizhstal Steel Mill, the largest in Ukraine. In 2004, according to the company’s own statistics, it accounted for 20 percent of Ukraine’s steel output and turned a $377 million profit.

Yet it was sold to Pinchuk and Akhmetov for $850 million that year, only to be renationalized and auctioned off again a year later after the Orange Revolution. The second time it fetched $4.8 billion from Lakshmi Mittal of Mittal Steel.