Initially, before the spread of Christianity, the holiday of Ivan Kupala was associated with the summer solstice (June 20-21). C adoption of Christianity ritual of the holiday was dedicated to the birthday of John the Baptist – 24th June. This is related to his national title in different countries. In the new style birthday of John the Baptist later, and falls on July 7. 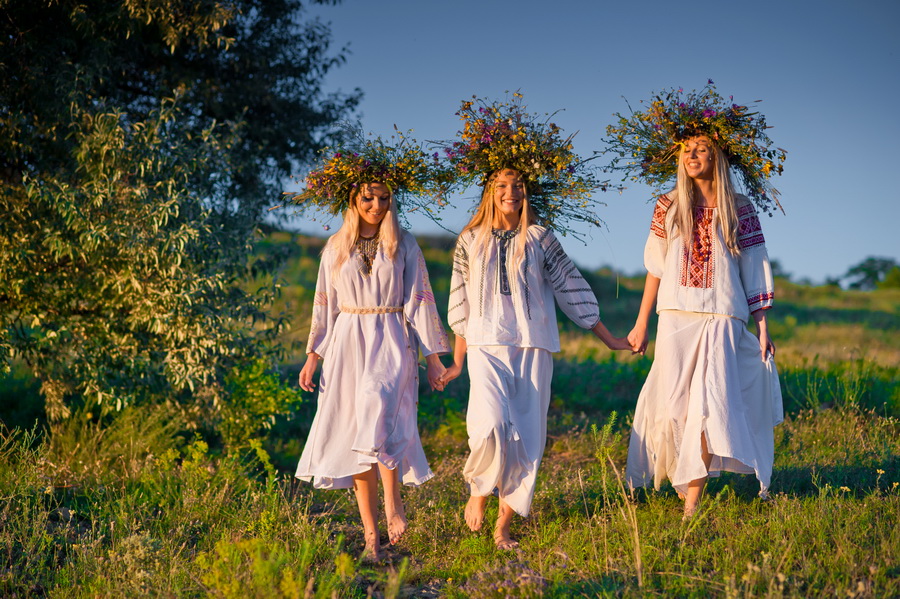 In mid-June afternoon sun reaches the highest point in the sky and in a position to remain for some time, which is called the summer solstice. Then, reaching full expression of their creative powers, it turns to winter road losing his kingly power over nature, its Life-giving force, and begins to lower and lower slowly down the hill of heaven, the days begin to wane. The whole of nature, as if sensing his close old age, in a hurry to live life to the fullest. 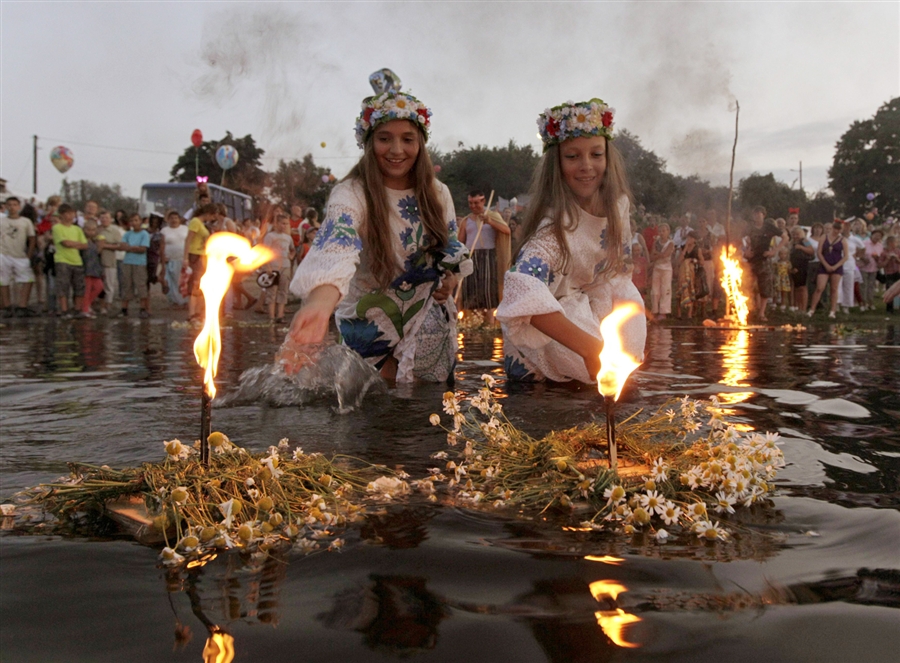 That night no one should sleep. In midsummer night enchanted trees move from place to place and talking to each other through the rustling leaves, the animals talk to each other, and even grass that filled the night special, miraculous power. All earthly zelie-bylie this night gets supernatural power: how evil and good. 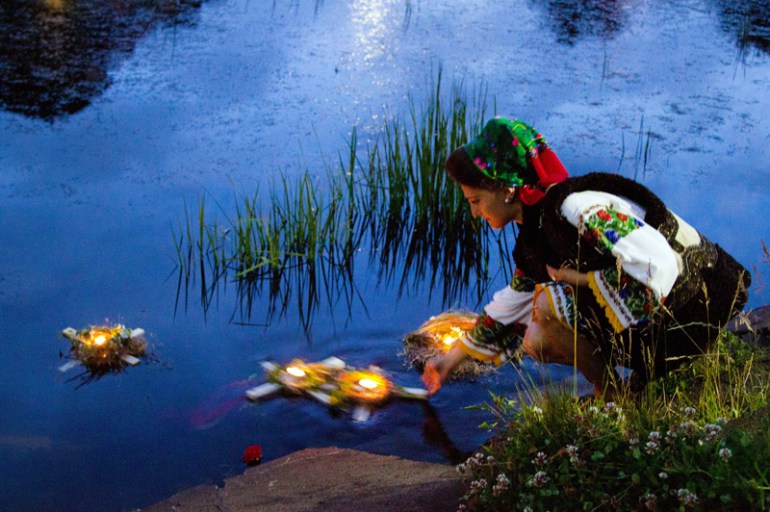 Night blooming grass fire. These are – black paporot, king-king, lion, dove, and others. Different color glows steady, strong flame looks like a lightning, flying, ghost flames. “The grass lion, – is told about one of them in the oldest of the” Zaleynikov “- grows small, and it seems kind of like a lion. On the day it and not accept it, it shines at night. On it two colors, one yellow, and one night as the candle burns. nearby grass around her there, and that is, and she bowed before her. ” And that’s what they say about the wonderful grass chief executives: “Although what a storm, she bowed to the east all the trunks, the same, if there is no wind.” Fern, which reveals a strong flame-red (crimson published) lightly shimmering color only for a few moments in the midsummer night allows the finder to guess the future.

As is well known, and this custom is well preserved, the main entertainment for the evening Midsummer are jumping over the fire. However, and the single girl something to do on a holiday. 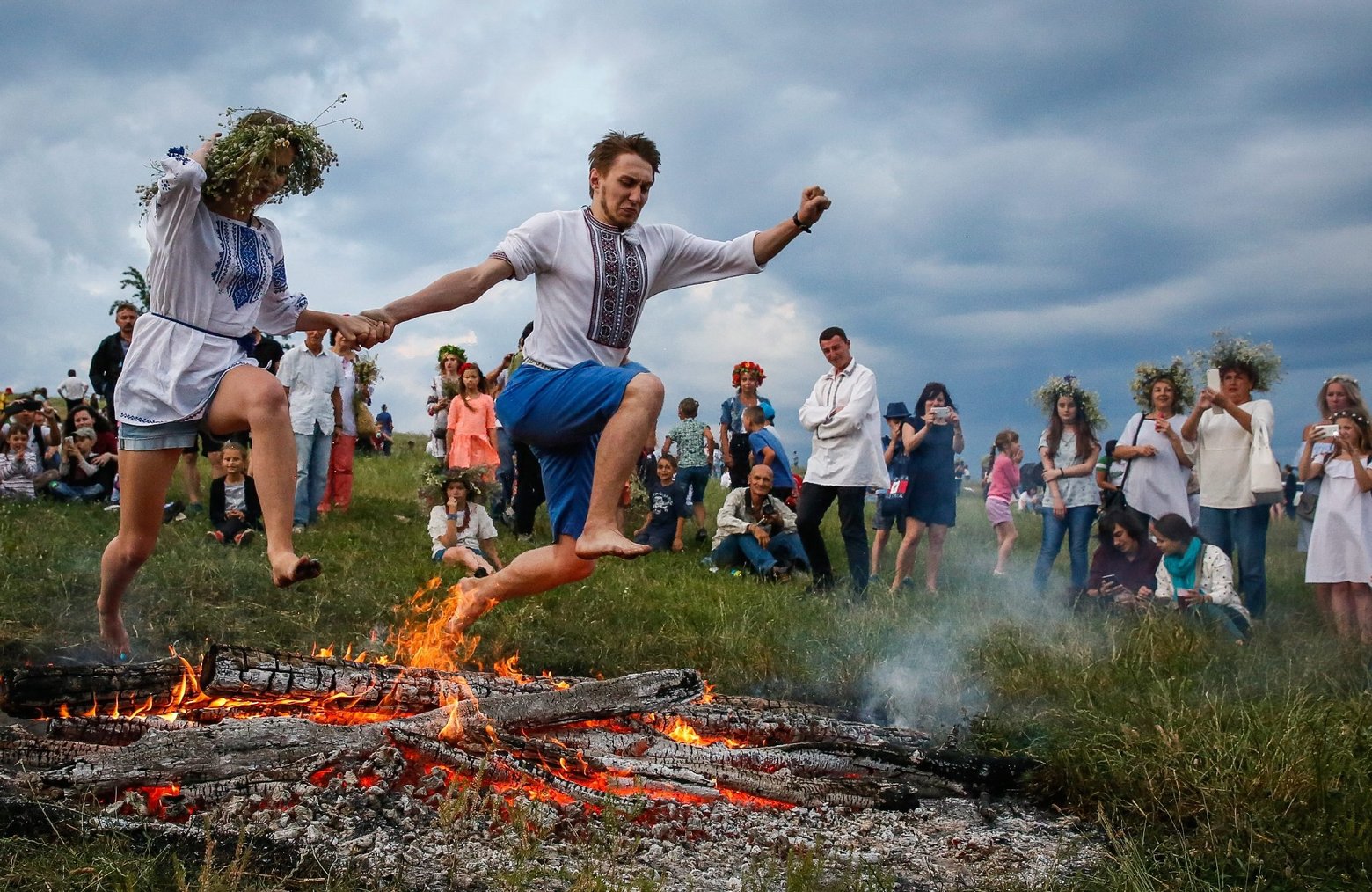 Unhappy in love, in order to bewitch chosen, it is recommended at midnight on Ivan Kupala three run around a field of rye. Desirable naked. While beauty is worn bare circles will see her lover in a dream, and in the morning will understand that it is precisely the one and only, he sought all his life.

At the end of the action can be fun to sleep. This does not concern only the most courageous and pure heart, who has a chance to find the magic fern blossom and get all earthly treasures. But remember: the way to the flower protects evil power, and worldly riches, which he opens, no one has brought no good.

According to legends of peasants, Kupala, the shortest night, can not sleep, as revived and is particularly active evil spirits – witches, werewolves, mermaids, snakes, witches, goblins, water, goblins. 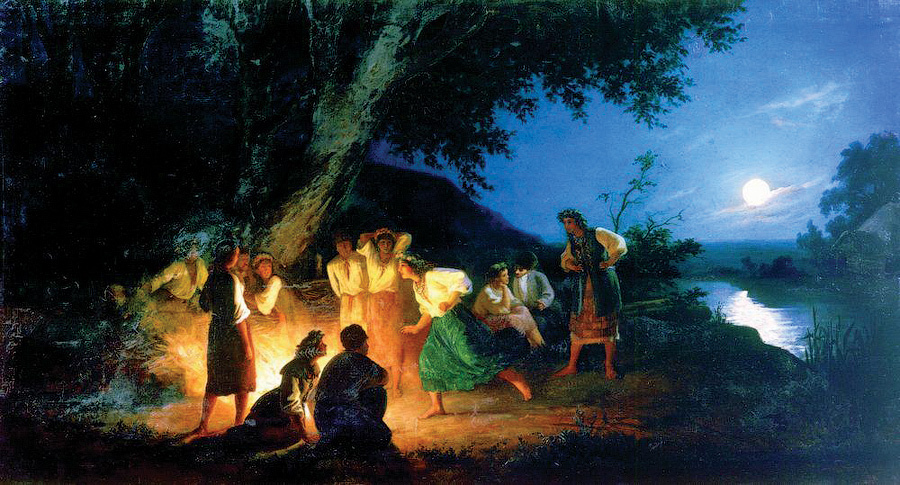 It was believed that witches of Ivan Kupala celebrated the holiday, which is causing harm to people. Like, the witches stored water, boiled with ashes midsummer bonfire, and of Ivan Kupala, spray yourself with this water, witch could quietly go where she pleased.

On the day of Midsummer tried to heal dew. To do this, get up early and walk barefoot on the healing Kupala mildew. That day was a massive collection of herbs. Special healing power midsummer gathering grass to the rising sun, and so, as the saying goes, “The early bird gets the give and God!”

In ceremonies and games spring-summer cycle girls always adorned themselves with wreaths. Thus, in East Slavic rite “wires mermaid” for mummers “mermaid” wove a special wreath adding nettle or doing a lot of wreaths, honeydew their mummers on the head, neck, hands, all uveshivaya wreaths. Subsequent destruction of these wreaths (throwing them in the cemetery, in the water, fire, etc.) symbolize the act of exile “mermaid.” 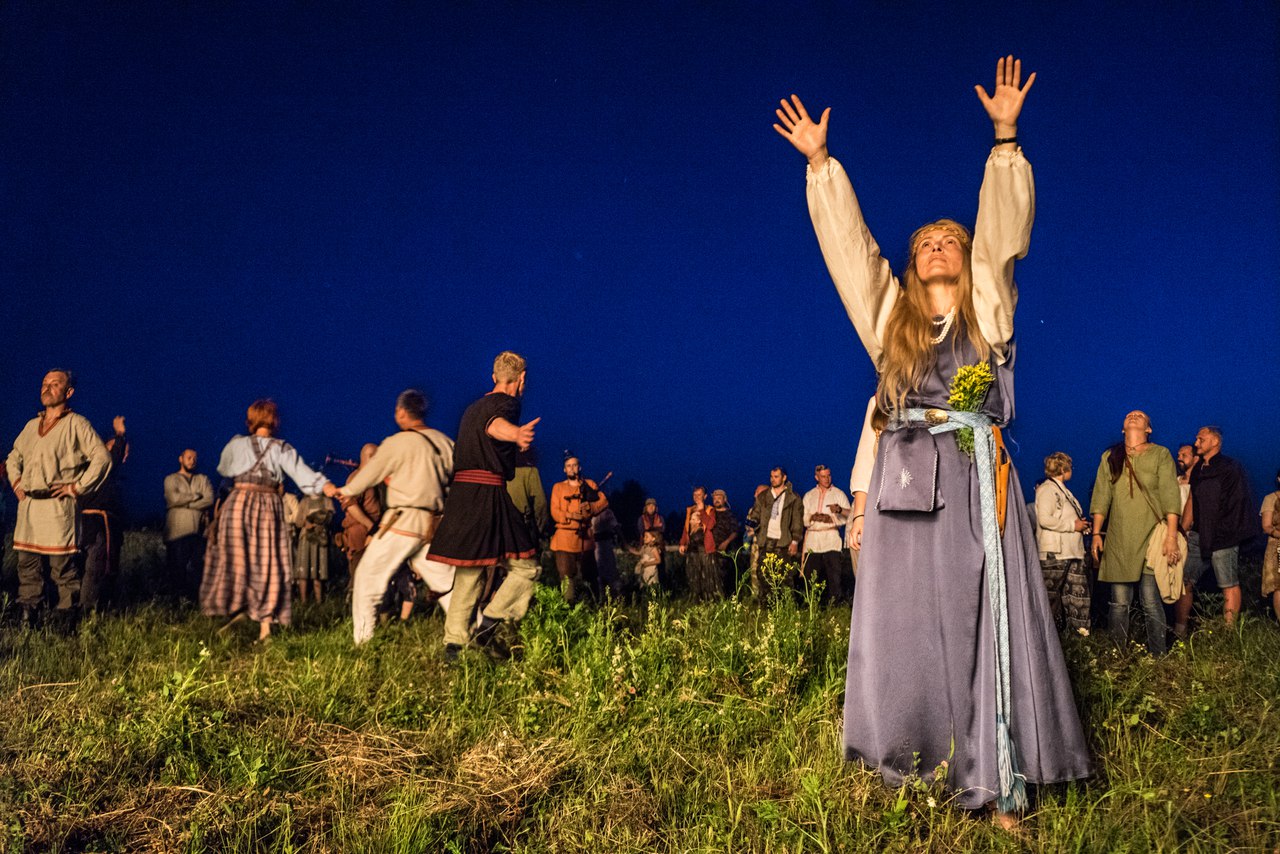 Ukraine has hitherto escaped the next rite is: girls, their heads removed garlands of fragrant herbs, in holiday attire, but the guys, famously hall cocked hat, also adorned with flowers, gathered on the eve of Kupala in a predetermined location of the tree or chernoklenu Maren, hung with wreaths and ribbons, put it under the tree made of straw, tiny, and sometimes more than God – Kupala, wearing a chemise and plahtu with monistochkoy neck and a wreath on his head. Immediately arranged tables with snacks and inevitably vodka. water falling.

The rituals of the holiday

Jumping over the fire

On bathing our ancestors held fire rituals and ceremonies. Fire ritual consisted of large fires burning in Kupala night. Ohnište accompanied by games, songs and dances. To protect and cleanse themselves from evil spirits, people jumped through these fires. A good jump is if the flame touches the jump and will not spark, means to marry or luck.

Those who are about to marry, when jumping tightly holding hands, for, according to accept, if not unclench his hands – to be a wedding.

Bonfire on Midsummer Day. Jumping over the fire – the brightest holiday tradition Midsummer

Tried to jump higher – who jumps highest, will be the happiest in the coming year.

In midsummer bonfires burned mother taken from sick children’s shirts to wash with it burned the diseases themselves. And the smoke from the fires chase away the dark forces of the villages and fields.

On the night before Midsummer girl lowered onto the river birch wave wreaths with lit candles or splinter, weave garlands of Ivan da Marya, burdock, bogoroditsynoy grass and bear’s ear.

If the wreath is sinking at once, hence the restriction out of love and married him not to go to the bank will beat – be unmarried. Who wreath longest swims, that will be all the happier for it, whose splinter longer Pohorje, she will live a long life-predolguyu!

To perform this divination, take a wax candle, broken it into small pieces, put in a metal spoon. Spoon heated in a candle as long as the pieces do not turn into a molten liquid. When the wax is growing, one spirit is poured into the water content of the spoon. The figure obtained by guessing. To guess by candlelight.

Herbs and flowers, gathered in John’s day, put under Ivanov dew dried and saving them, saying that more healing than collected at another time. They fumigate the sick, struggling with evil spirits, they were thrown into the furnace flooded during a storm to protect the house from lightning, and use them to incite love or for “otsushki.”

Of the wonderful herbs collected at this time, is called a “crybaby-grass”, special force which, in the opinion of the peasants, lies at its root, which has a property banish evil spirits, the owner of the same root is to instill a fear, “terlych-grass” is used for charm boys girls: they wear it in her bosom, saying: “Terlich, terlich, poklich lads!” Mugwort herb, according to popular belief, the nasty witches and protects them from the house and yard. It is braided into strings and put under Ivanov dew with the sentence: “Mother Earth, Father Sky, give your servants from this herb’s health!” Grass “Zyablitsev” helps to play the baby crying and insomnia; dried “rasperstitsem” sore spots sprinkled on the body – cuts, abscesses, tumors, “shepherd’s purse” has long been harvested as a good hemostatic agent for various bleeding; rheumatism collected a large number of stinging nettle , for the treatment of wounds, burns stocked orpin; in case of colds, coughs had to have at-home mother, stepmother, oregano, rosemary.

In St. John’s Night on the ant piles collected in the oil vessel, which is recognized healing remedy for various ailments.

If the Midsummer climb twelve gardens, any wish come true.

If this night to pick a flower Ivan da Marya and invest in the corners house, the thief does not come to the house: a brother and sister (yellow and purple flowers, plants) will talk to each other, and the thief would think that the owner talking with the hostess.

In John’s day went to the baths and the first time steamed fresh birch twigs. In “Ivansk broom” has magical powers, to add color, fern leaves, or made it out of the twelve plants collected in Kupala night. From such a broom said, “health grows stronger.” With the first new broom girl wondered to marriage: the comfort of the bath, threw it behind his back – to butt falls, go back and get married.