Головна Events Chicago in Winter: no reason to stay indoors 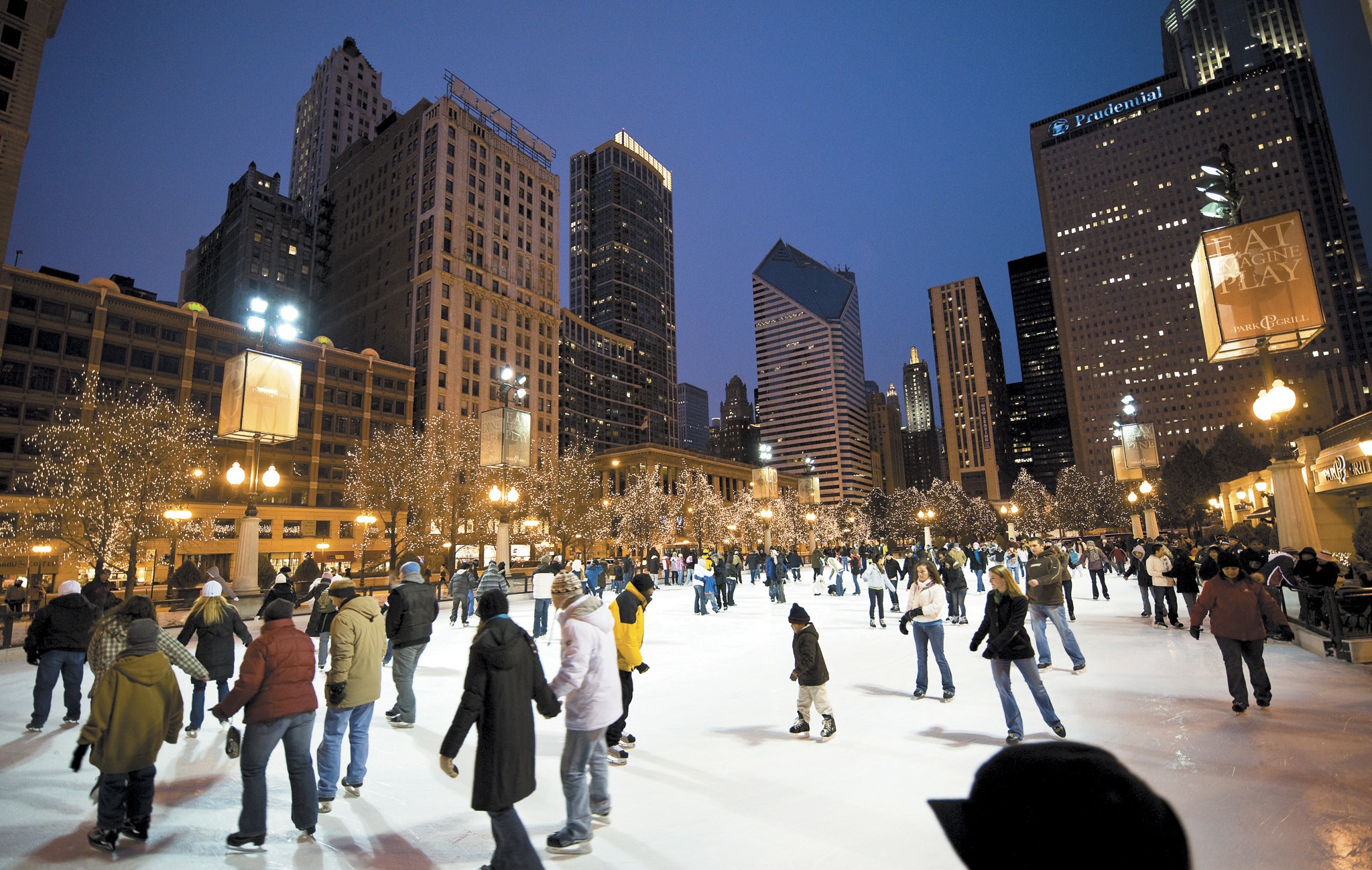 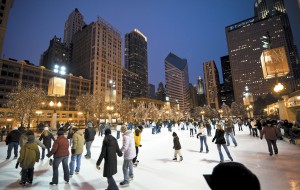 Hey it’s cold out!  In typical Chicago fashion temperatures have been changing from near 40°F (4°C) a few weeks ago to the more usual 25°F and even down to the expected foray into Fahrenheit sub-zero temps. (-18C and below).  Many folks exchange their usual outside activities for warmer climes and times with, say, Netflix and hot chocolate.

Why?  Dress properly and the outside world is open to you year-round, regardless of weather.  For starters – let’s go ice skating.  If you work downtown, it’s really easy – head over to the rink in Millennium Park, on Michigan Ave., right below The Cloud Gate, or just a little further north there is the wonderful Skating Ribbon in the new Maggie Daley Park. This iced track is about 10 – 12 feet (3m) wide, and winds around, with gentle loops and a few tight turns, in front of a field house where you can rent skates for $12.

And there is plenty of hot chocolate; what’s not to like?  While inside the field house, you’ll notice one of the things that makes Chicago such a great city – the generosity of its private and business citizens that made the Park possible. 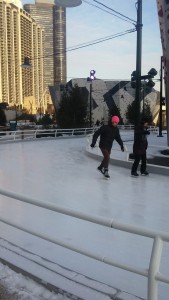 Skating is not limited to downtown, of course, many, many of Chicago’s parks offer the chance to skate, just look around your neighborhood, or check online at http://www.chicagoparkdistrict.com/events/ice-rinks/ where you will find rinks and events, including clinics hosted by some of our very own Chicago Blackhawks!  Go ‘Hawks!

If you’d rather spend less time outside, this is the perfect time of year to visit and explore Chicago’s world-class museums.  Start with The Art Institute of Chicago, voted as “The World’s Best Museum” in the Travelers Choice online survey.  Free days (for general admission to Illinois residents) are from January 4th through February 11th, and every Thursday, year round. Thursday is also the late night, when the Institute is open till 8pm, so hurry in and see what you’ve been missing, including:

– A Voyage to South America: Andean Art in the Spanish Empire (through February 28, 2016);

and other special exhibits do cost a bit, even on free days, but they are well worth the price. 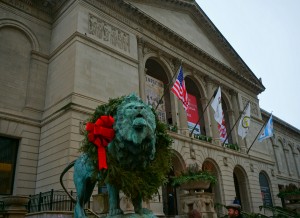 We’ll find ourselves at the Museum Campus, and the Field Museum of Natural History.  Sue, the famous Tyrannosaurus Rex, is fiercely stalking prey in the main lobby, right next to a much more recent pair of African elephants.  Glorious viewing. General admission is free to Illinoisans through the entire month of February, so don’t miss out. 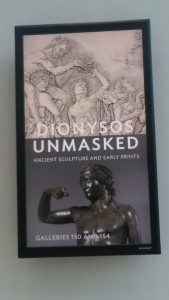 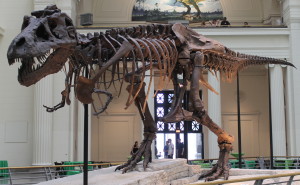 But, as with the Art Institute, the special exhibits hold the most appeal.  Since we just came from the Ancient Greek exhibit at the Institute, let’s go right into The Greeks, from Agamemnon to Alexander The Great, with 500 artifacts, some of which are over 6,000 years old.  Look closely at the artwork, and especially the statues, from both exhibits.  Do you wonder how long it took a sculptor to create just one of these magnificent works, using bare hands and bronze tools, and how much study of both the human form and the marble stone it took to be able to render such lifelike presentations? 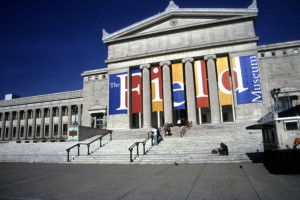 Don’t forget to visit the Shedd Aquarium  with its famous and fabulous exhibits, including the Caribbean Reef, right in the main rotunda, and the Beluga Whales, housed in a giant area all their own.  Amphibians is currently the main special exhibit. 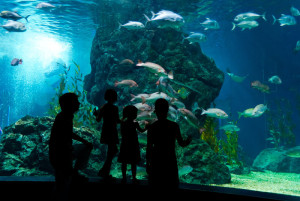 The Adler Planetarium is another of Chicago’s jewels  complete with learning centers and an asteroid that travelled millions of miles to get to Earth, so, as their sign says, “the least you could do is touch it.”  Go ahead.  While you’re there, learn about our solar system and our galaxy, gaining some perspective on just how small a spec this wonderful Earth really is in the entire scheme of God’s great universe.

The mighty Museum of Science and Industry is always worth several visits.  Always.  And winter is a great time to go there and wander around, indulging yourself in the aU-505 Submarine, for instance, or the Science Storms display, or any of the other displays and exhibits.  It’s always changing, so visit http://www.msichicago.org/  to see what’s going on when you’re ready to visit. 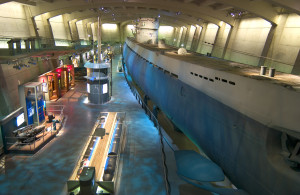 Chicago’s lakefront and it’s attractions are astonishing and beautiful, but the entire city is “your oyster” all year round.  Between museum visits, you can swim at the indoor pool in Portage Park, or any of  several other indoor facilities.  I mention Portage because their outdoor pool still holds world’s records set by Mark Spitz, back before records were measured exclusively in meters.

Go snowshoeing.  It’s much easier than learning to cross country ski, and doesn’t require much in the way of trail preparation.  Any reasonably open walking path will suffice for a nice stroll through the woods on snowshoes. 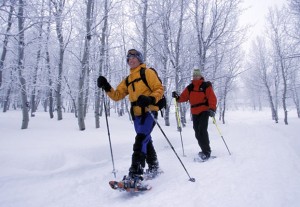 Of course, I would be remiss in my duties if I did not encourage every reader to take in at least one live theater production over the winter months.  Steppenwolf  Theater is not to be missed.  Started in a church basement, over 35 years ago, it has grown and evolved into Chicago’s, and the nation’s premier ensemble theater, with over 44 talented members.  Trust me, whatever is showing, on any night, is excellent theater.  GO.

Now, isn’t all of that so much better, so much more interesting and fun, than night after night of Netflix at home?  Chicago is beautiful, all year round.  You owe it to yourself to explore the beauty and adventure.