Головна Chicago Chills & Thrills in November. Weather is no match for Adventure 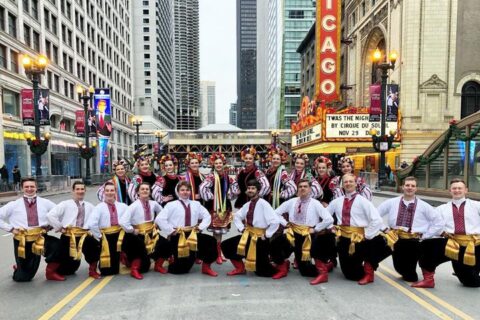 The weather is definitely showing us some cold, Fall is here and Winter not far behind, but we have a month full of adventure in store, so let’s get started, shall we?

Did you know that today, Friday, November 5th, is both Guy Fawkes Day and National Redheads Day? Me neither.  Mr. Fawkes, it seems, was quite the man of his day; Lady Antonia Fraser describes him as “a tall, powerfully built man, with thick reddish-brown hair, a flowing moustache in the tradition of the time, and a bushy reddish-brown beard…a man of action… capable of intelligent argument as well as physical endurance, somewhat to the surprise of his enemies.”

But he was executed for participating in “The Gunpowder Plot” to blow up Parliament on November 5, 1605, in retaliation for laws persecuting Catholics. He was caught, tortured grotesquely and executed along with his co-conspirators. King James declared November 5th should be celebrated with bonfires in thanksgiving for his survival.

I had no idea that redheads feel that they need a national day of recognition.  For most of the redheads I’ve met, every day is a day to celebrate.  But, hey, we’ve a few redheads among our friends, so we’re going to celebrate even more today.

On top of all that, out in suburban Des Plaines, the Des Plaines Theatre, 1476 Miner St., https://desplainestheatre.com, has undergone a complete renovation and restoration and is open once more. The building front is beautiful brick, with retro-looking, but definitely high tech, signs inviting us all in for the amazing shows.  Tonight the Kenny Wayne Shepherd Band, will bring the blues to town in a show that will highlight their Louisiana origins, latest album, and an evening of good, loud, musical fun. Kenny is an amazing, young, blues rock guitarist, who has sold millions of albums and recorded recently with Shemekia Copeland, who now wears Koko Taylor’s crown as the Queen of Blues. Yeah, this will be fun.

You guys liked that show as much as we did, didn’t you? Drive safely, and we’ll see you on Sunday.

We haven’t been to the Field Museum of Natural History, 1400 S. Lake Shore Drive, https://www.fieldmuseum.org/, for some time, so today, Sunday, November 7th, let’s meet after breakfast and head inside. There’s an exhibit I really want to check out, let’s walk over to where, according to the museum, we can “Learn how to spot examples of biomimicry in technologies based on nature’s designs. Have you ever used Velcro, heard a chainsaw, or powered your home with electricity from turbines? Find out how nature’s innovations made these technologies—and more—possible in The Machine Inside.” 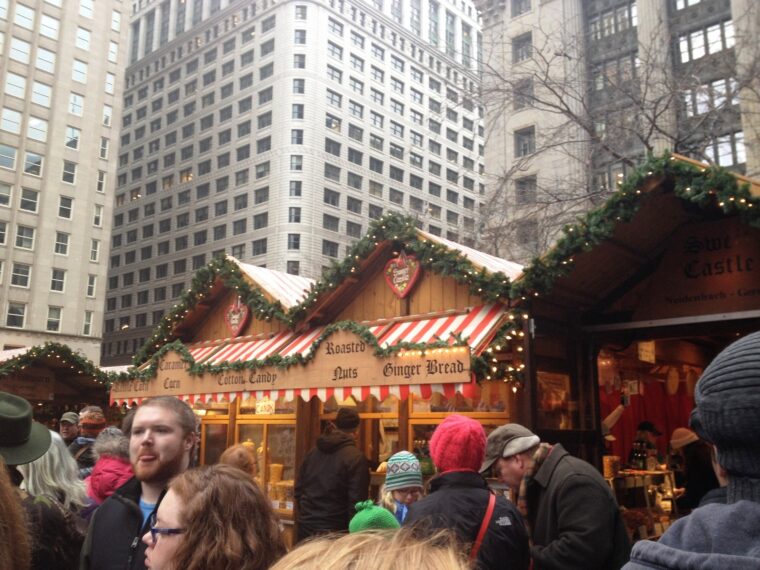 Let’s keep moving over to the Griffin Halls of Evolving Planet and say hello to Sue, the world’s most complete Tyrannosaurus Rex.  Look at those teeth! See the way her tail helped her balance her head when on the prowl for food? I’m very glad she’s not hunting me! There’s so much more to learn, especially about how the planet is still changing, how much human activity is driving that change, and what we can expect to happen in the near future.  Scary, isn’t it? That was both fun and challenging, and there will be lots to think about on the way home.  See you next week.

It’s late in the year for this, but we haven’t gone yet so it’s absolutely certain that today, Saturday, November 13th, we’re heading out to Kuipers Family Farm, 1N318 Watson Rd, Maple Park, IL, https://www.kuipersfamilyfarm.com/, to see what kinds of apples, pumpkins, and other goodies we can pick up to help us get through the winter. No, it is not too cold. Wear a coat and hat. They are open until the end of the month, so there may just be a few late season apples for us to pick.  If not, there are still be plenty of fresh apples to choose from inside the store. They grow over 20 different varieties of apples, so let’s have a few sample bites and ask these very nice people about the different apples and their uses.

Oh, goodness, can’t you smell the Orchard Bakery already? Cider donuts, here I come! Oh, wait, watch, they’re spinning caramel apples, right now, and I want one. Ummm, mmm, mmm, this is so fresh, crisp, gooey and good. Yes, we’ll have a couple more to take home, thank you, along with freshly-pressed cider, donuts, those caramel apples, a couple of pies, and even some fudge.  Oh, boy.  Well, we’ll just have to keep some of it locked up until Thanksgiving, won’t we?

Today, Friday, November 19th, is going to be a perfect holiday kickoff. Meet us at 4:30pm at The Wrigley Building Centennial Plaza, 400 N Michigan Ave, for the Magnificent Mile Holiday Tree Lighting Ceremony. Bring masks and be prepared! This is a great start to the season, don’t you think? Look at that beauty light up, twinkle and shine.  Do you see the lights winking at you?  I think they are sending you secret Christmas messages!   But as pretty as this is we must move on. We’re walking south to Millennium Park and the crowds will gather early, so come on! 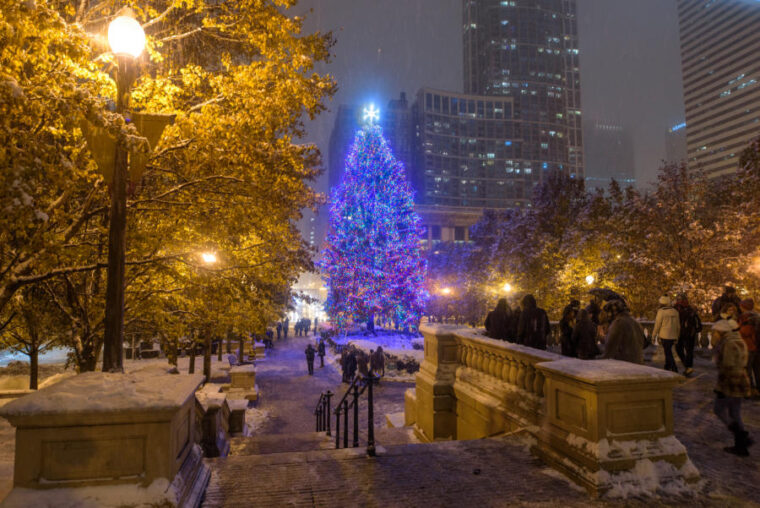 Oh, good, we’re just in time to get in decent position to see the official Chicago Holiday Tree light up, at about 6:30pm. The ceremony starts at 6:00pm, with the usual assortment of speeches from the mayor and other politicians, some live music, and finally, the countdown. “Four, Three, Two, One” we are shouting in unison and now the tree is lit up, in all it’s holiday glory.  Beautiful, isn’t it?  Which one do you like better? 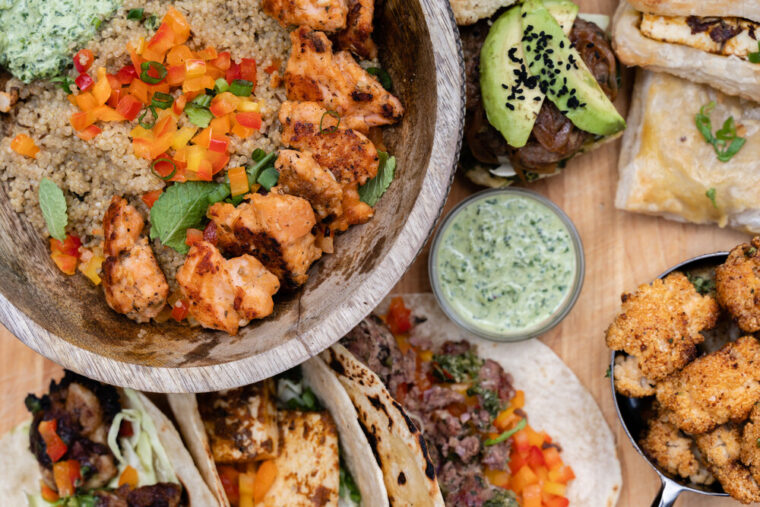 Time to eat!  Urban Space, 15 W. Washington Street, recently opened with a dozen restaurants, all very different from each other, and it’s quite close by. Perhaps you want to see if a burger from Edzo’s lives up to the Evanston original? Somebody we know is already heading to Plant Junkie to satisfy their vegetarian appetite.  Us, you ask? We’re thinking it’s time to try something Filipino, a cuisine which we’ve never tried, from Isla Pilipina, before heading over to Bhoomi for some delicious, spicy Indian grilled meats, sauces and breads. Yes, it’s delicious, and yes, your burger smells and looks just right.

Did everyone get enough to eat and share a little?  Here, try some of this.  Yes, I’d like a bite of yours. Oh, yes that is good. Now, let’s head to the bar that we passed coming in and have a drink at the Peregrine Club.  They serve a bunch of different cocktails here, so yes, I’ll have a Bourbon and Amaretto, how about everyone else? Check out the menu, it’s extensive, holy cow!

All this is in one open court, with plenty of spaces to gather our group and chat, catch up, and unwind from a hard week at work.  Thanks, everyone, we’ll see you tomorrow.

Today, folks, we will be downtown this morning, Saturday, November 20th, because the Magnificent Mile Lights Festival is happening again this year and we won’t miss it. Bring the kids, because the Parade is filled with their favorite Disney characters, as well as a host of other entertainers who will light all the lights on Michigan Ave as they pass by.  Pretty amazing, isn’t it?  This year the shops all have very engaging window displays again, inviting us in to do some early shopping.  We’ll pass for now, but you go ahead. 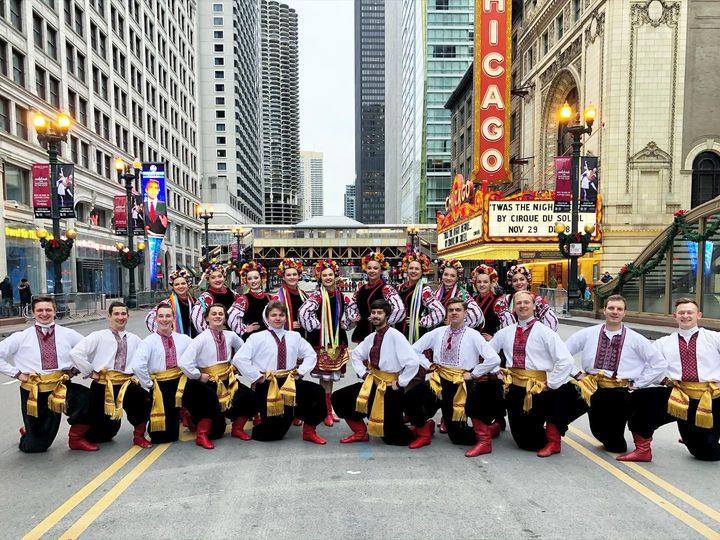 Wake UP, everybody! It’s Thursday, November 25th, and time for The Main Event! The Parade, remember, my friends, the Thanksgiving Day Parade.  Today is Thanksgiving, of course, my favorite holiday of the entire year, so let’s not miss a single minute.  Hurry, we need to be downtown early, before it starts at 8:00am. They will have tons of floats, marching bands, a couple of horse troops, dance acts, and so much more stretched along the route on State Street, from Ida B. Wells Drive to Randolph Street.

Isn’t this exciting? Look, over there, is that really Hromovytsia! They are the most exciting, spirited, and skilled dancers; look at those leaps and twirls!

The festivities last until 11:00am, but you have family coming today, and I know you have a really big family.  Enjoy your day with them, and perhaps a few close friends, and after the feast, when all are gathered around, raise a toast to love, to family, and to friends, and we’ll do the same around our table.

It will take the entire weekend to clean up, start the Christmas decorating, and get some holiday shopping done. Yes, I’ll pick up that super-secret toy for your kids, but you will still have to wrap it up later.  Take Sunday off from everything and relax.  Breathe deeply, let it out slowly, and feel your muscles relax and all the tension and excitement from the week slip away.

It’s been a wonderful riotous month, hasn’t it? Let’s spill over into next month before we say goodbye, because tonight, Thursday, December 2nd, there’s an excellent Swedish rock guitarist on stage with an equally excellent American rocker at our newest favorite concert venue. “Yngwie Malmsteen with John 5” is at the Des Plaines Theatre for a single show.  Malmsteen, influenced by such artists as Bach, Vivaldi and Paganini, was instrumental (pardon the pun) in creating the ‘neo-classical’ genre within metal rock. John 5 has played with Rob Zombie and David Lee Roth, as well as Lynyrd Skynyrd and many others. Both have numerous solo albums and are considered amongst the best rock guitarists ever. So, be sure to get your tickets early and meet us there well before the show begins at 7:30pm. 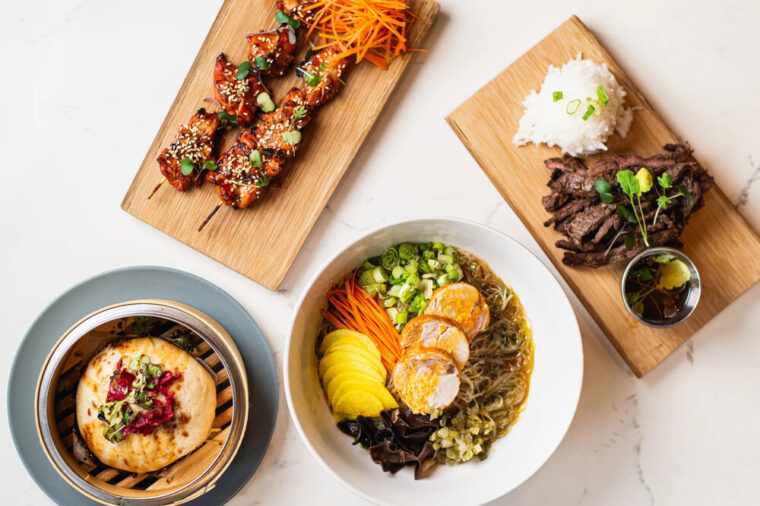 WOW! That was quite the experience, wasn’t it? My ears will be ringing for three days, I think, and that’s a small price to pay for such excellence. We did it yet again, friends and fellow adventurers, and the Holiday Season is now in full swing, so don’t wait for us. Keep adventuring, and we’ll meet again soon. 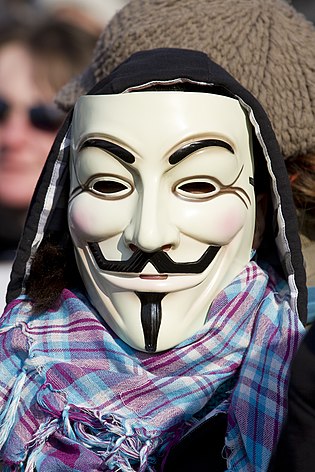