Easter is right around the corner! Do you know all of Ukraine’s unique Easter customs? Here’s a cheat sheet of the wonderfully unique traditions of Ukrainian Easter:

After Palm Sunday services, it was customary for Ukrainians exiting church to gently tap each other with the blessed pussy willow branches. This custom, known as “Boze Rany” (“God’s Wounds”) was done to imitate the scourging of Jesus by His captors on Holy Friday.  But the tapping of friends with the pussy willow branches was actually a wish for good health, wealth and happiness. That is because the tapping was usually accompanied by the phrase: “Bud’ velyki yak verba, zdorovi ’yak voda, bohati yak zemlia’. “This expression translates as: “Be as big as the willow, healthy as water, rich as the earth”.  The blessed willow branches were then taken home. Some were planted by the father or oldest son.  If they took root, it meant many good things would come to the family that year.  Most of the blessed pussy willow branches were placed in frot of, behind or above holy pictures in the home. These branches would replace the branches that had been placed the previous year.   The branches which were taken down were carefully burned. 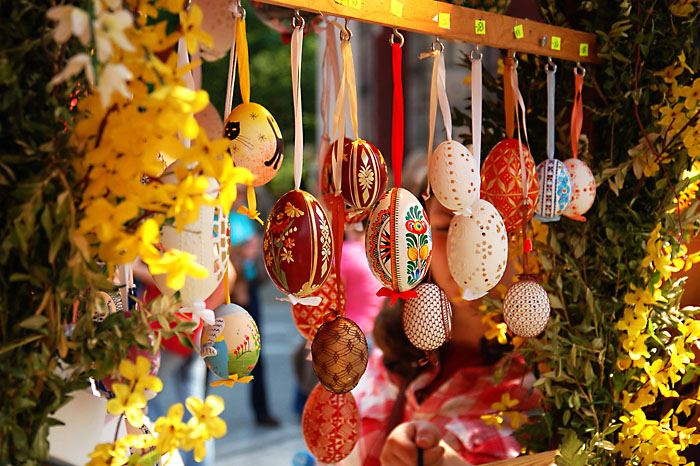 Holy Thursday, known as Velykyi Chetver or Strasty Khrysta, is a day to commemorate Christ’s passion. In doing this, everything must be washed or cleaned, and all food should be cooked or baked. All of the household work must be completed on Holy Thursday, as after Holy Thursday there is no work permitted. Time spent after Holy Thursday is dedicated to various religious services. 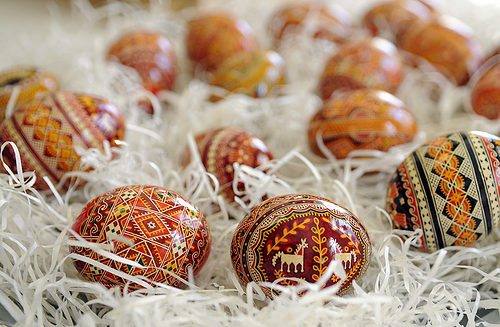 “Velykodn ‘ia Piatnytsia”, Good Friday, is a solemn time that commemorates the day our Lord was crucified.  This day is observed as a strict fast, so no meat or dairy products are consumed. No manual labor is allowed.  All conversation is done quietly.  Part of the services of that day includes the ancient custom of the Veneration of the Holy Shroud (“Plaschenytsia”).  The Holy Shroud is a representation of the sheet that Christ was buried in following his death on the cross. The body of Jesus with His wounds is depicted, laying in repose, often pictured with other individuals who were part of the events of Good Friday, such as Joseph and Nicodemus, who took Jesus down from the cross.

There is also a solemn procession around the church, lead by a worshipper carrying the Crucifix. In the procession, the elders of the parish carry the Holy Shroud, the priest carries the Holy Eucharist and the altar boys carry lighted candles and the wooden clappers. This procession is symbolic of the journey from Christ’s Crucifixion on Calvary to His Tomb. The procession reenters the front doors of the church and the Holy Shroud is placed on a representative tomb. The tomb is usually surrounded on three sides by candles, palms and flowers. As a show of devotion and adoration, the faithful approach the “Plaschenytsia” on their knees, make the Sign of the Cross and kiss all five wounds of Christ pictured on the Holy Shroud. The time between noon and three o’clock is known as the “Devotion of Three Hours”.  During that time, members of families and church organizations take turns keeping vigil as guards of honor at the Holy Grave. 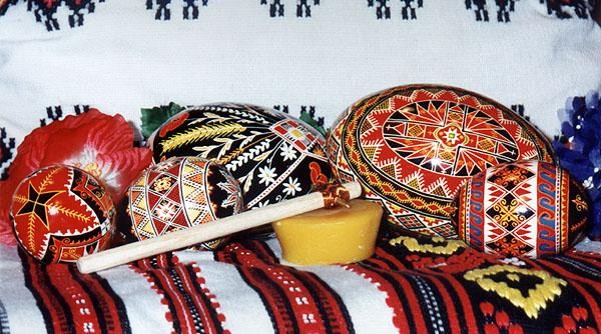 Depending on the region you practice, some families have their basket blessed on Holy Saturday, while others have it blessed on Easter morning. What goes in a Ukrainian Easter basket? 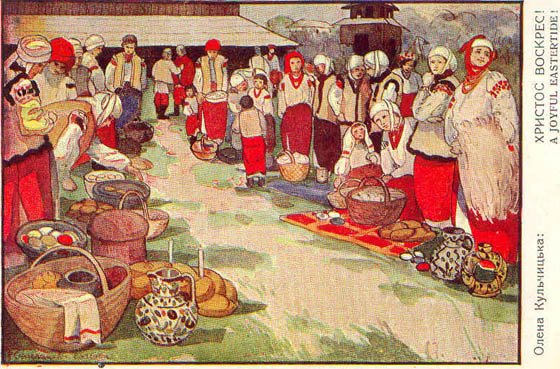 It is traditional that during the Great Fast (Lent), the faithful fast and abstain from meat and dairy products as much as possible. To show their joy and gratitude at the end of this time of fasting, people take to Church baskets of food which are to be blessed and then consumed on Easter morning to “break-fast”. The traditional Ukrainian Easter morning breakfast of hard-boiled eggs, various meats, sausages and ham, butter, decorative paska, salt, horseradish, and cheese is a very special treat. This meal is very much looked forward to, especially in light of the symbolism of the foods that are consumed.  In the Ukrainian tradition, the Easter basket foods symbolize: 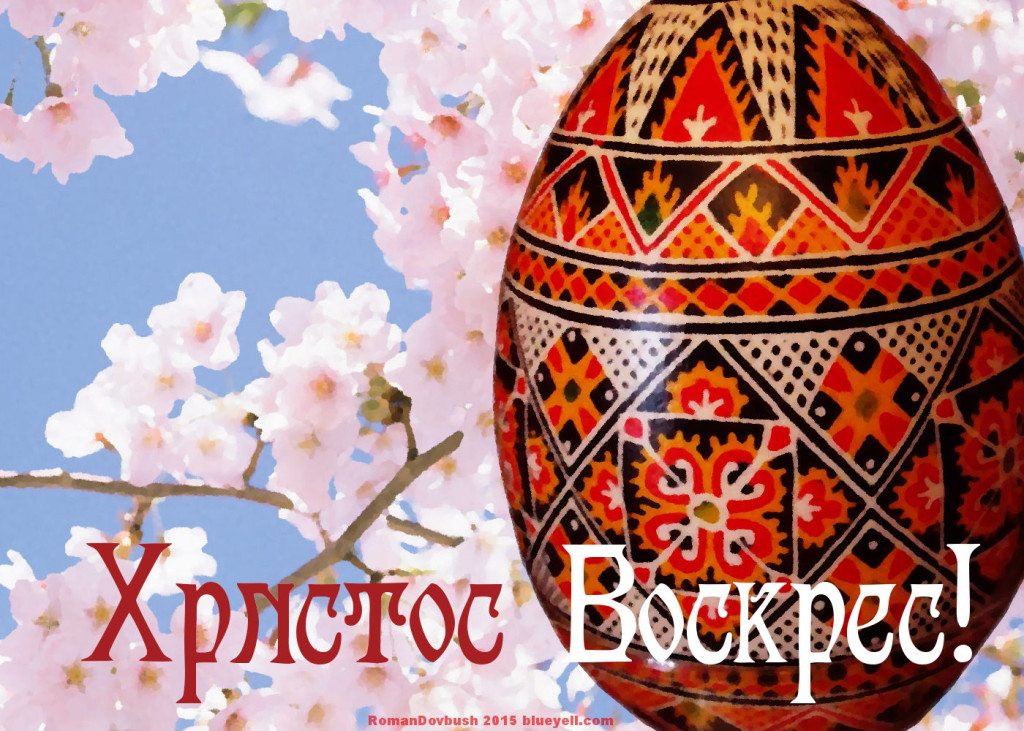 Easter Sunday morning in the Ukrainian tradition begins at sunrise. That is when the faithful arrive for Resurrection Services. The service before the Divine Liturgy consists of a procession which circles the church three times. The journey is made to symbolize the trip of the women to the tomb to anoint the Body of Christ on that first Easter morning. The makeup of the procession is similar to the one on Good Friday, led by a worshipper carrying the crucifix and altar boys using the kalatala (wooden clappers). Parish elders carry the Plaschenytsia (Holy Burial Shroud).

After the third passage, the procession stops in front of the church doors, which symbolize the impossibility of being able to enter the Kingdom of God before the Resurrection of Jesus Christ. The priest sings the joyful Easter song “Khrystos Voskres” (“Christ is Risen”) the first time himself.  All of the faithful repeat the triumphant hymn a second time. Then, striking the doors of the church with the crucifix to open them, the priest begins “Khrystos Voskres” a third time, as the congregation joins in. This dramatic entrance reminds us that Heaven is now available to all because our Savior has conquered death with His death. All enter the church and the Divine Liturgy of Easter, the Great Day, begins.

Arguably one of Ukraine’s most famous Easter traditions is their intricately decorated Easter eggs known as ‘pysanka’. The word pysanka comes from the verb pysaty, “to write”. Creating pysanka is an extremely complicated endeavor and they are usually created during the last week of Lent. The smoothest and best-shaped eggs are used to make pysanka. A stylus is often used to ensure and perfect the clean lines and intricate patterns on the eggs. Pysanka are given to friends and loved ones to represent the gift of life, and are usually decorated to match the personality of the receiver.

One of the most popular; and oldest, pysanky legends tells of a young woman who was on her way home from the market in town. She had with her a jug of fresh water for her journey and a basket of eggs. On her way she met a stranger sitting on a rock. Thinking he must be a tired traveler, she offered him a drink of her water. When he handed the water back to her, she was surprised to see that he had wounds on his hands. The stranger said nothing, but got up and went in the opposite direction of the young woman. When she arrived home, she uncovered her basket and discovered her eggs had been turned into beautiful pysanky  The stranger, of course, had been Jesus Christ, and that was the first Easter morning.

Paska is beautifully decorated Ukrainian Easter bread. Tradition states that the baker must keep their thoughts pure and the entire household quiet in order to ensure the bread bakes properly and becomes its fluffiest. This means that no one, not even neighbours or friends are allowed to enter the home during its baking! The intricate décor on the bread represents welcoming imagery of springtime. Some Ukrainian traditions insist upon three loafs: one to honour nature, another to honour the dead and a third to honour those on earth.

Ringing of the Church Bell

Often, while the family was still having the Easter breakfast, the sound of the joyous ringing of the church bell would be heard. The ringing was done to proclaim the joy of the Resurrection of our Lord.  The task was accomplished by one of the boys of the village. He would have been the first to hurry home, have his Easter family breakfast and run back to the church. It was considered an honor to do the Easter morning bell ringing, and whoever the fleet footed lad was who accomplished the ringing was then predicted to be the First in many accomplishments in the coming year.

Easter was celebrated for three days

In Ukraine, Easter was celebrated for three days.  There was usually no work done, much food consumed and many hours spent in church, as well as with family and friends. Being such a happy time, there were also stories told and games played by the children. Among the games was the rolling of the krashanky (plain colored, hard boiled eggs. single egg: “krashanka”, from the word “kraska”, meaning “color”).  There were many variations of that game. The one popular among the girls was the line rolling. In that, girls would stand in two parallel lines and roll the eggs back and forth between partners. The two girls with the last remaining un-cracked egg would win all of the eggs that had cracked. Another game with krashanky was known as “chockamia”. In this game, two children would tap each others eggs together until one of the eggs cracked. The winner, whose egg did not crack, got to keep the cracked egg. Older children would do the airborne variation of the parallel line game. The eggs would be thrown between the teenagers in the lines. Again, the team with the last un-cracked egg would be the winner.