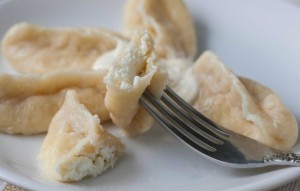 Varenyky is a popular Ukrainian dish made of boiled dough with diverse fillings, such as meat, mushrooms, vegetables, fruits, cheese etc. Varenyky is not a festive dish, but their taste leaves no one indifferent. These Ukrainian dumplings can be the main course as well as the dessert.

Ukraine is the motherland for varenyky, borsht, cabbage rolls “golubtsi” and salo. Delicious and hearty Ukrainian dishes are widespread throughout the world. But it wasn`t always like that. Ukrainian cuisine traditions began to appear only in 18th century and were completely formed by the beginning of the 19th century. It was connected with a long and complicated forming process of Ukrainian territory and nation. 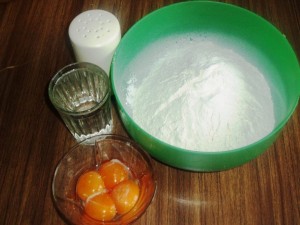 One of Turkish dishes “dyush-vara” impressed Ukrainians greatly, so they decided to turn it to their national food. “Dyush-vara” was a Turkish dumpling filled with minced mutton with fat and garlic. Mutton was not popular in Ukraine, so the fillings were changed and “dyush-vara” became “vara-niki”.

Varaniki or vareniki were made with usual for Ukrainians cottage cheese, sauerkraut, mashed potatoes, boiled beans, mushy peas, fruits and even flour. Flour fillings were especially popular in Poltava. The dough for varenyky was made of fermented milk products with buckwheat, rye or wheat flour. 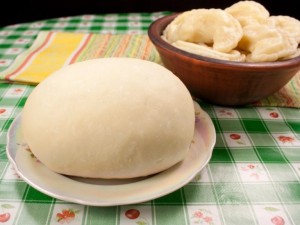 Vareniki in other countries

Vareniki are popular all over the world, but abroad they have other names, forms and fillings. In Russia they are called “pelmeni” and have only meat stuffing. Pelmeni are also smaller than vareniki and have the round shape.

In Italy there are ravioli, which are made of pasta dough with meat or cheese fillings and have mostly a square shape.

In Belarusian and Polish cuisines there are “kalduny”, which recipes are similar to Ukrainian varenyky recipe. 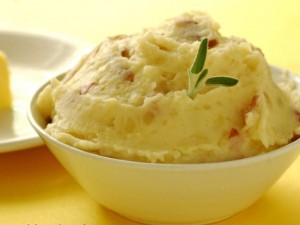 An outstanding Russian and Ukrainian writer Nikolai Gogol often mentioned varenyky in his novels. Born in the Cossack village Sorochyntsi, Poltava district, he was obsessed with Ukrainian cuisine, vareniki in particular. In his famous novel “Evenings on a Farm Near Dikanka” Gogol with fastidious attention described the way Paciuk swallowed his cheese varenyky with sour cream.

In “The Fair of Sorotchinetz” Nikolai Gogol also mentioned his favorite dumplings. He described the scene when Aphanasi was eating unceasingly vareniki and groping simultaneously his Khavronia. 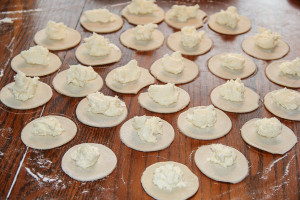 If you don`t know how to make vareniki dough, there are several variations of cooking, using mineral water, curdled milk or boiled water as the basic ingredient. Here is the classic and the most popular recipe for vareniki dough.

Put one cup of flour into the deep bowl. Add salt. 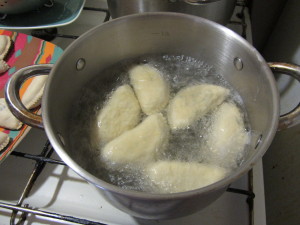 Warm up water till 30-35 degrees and add it to the bowl. Beat up one egg.  Mix all ingredients thoroughly.

Add the second cup of flour and place the mixture on surface covered with flour. Knead the dough with your hands. If it is sticking add some flour.

Continue kneading the dough until it becomes elastic.

Cover kneaded vareniki dough with a bowl or damp cloth and leave it for the “rest” for 40 minutes.

When the dough is ready, roll it out and using the special round shape or a cup cut out circles. Then place the filling in the center of each circle and tight up the edges. Put vareniki to the boiling water and boil for several minutes.

How to choose varenyky fillings 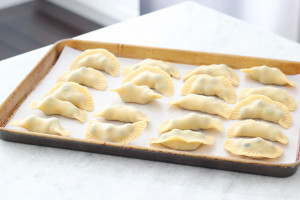 There is a great variety of varenyky fillings for any taste in Ukraine. They can be sweet or salty, spicy or sour, piquant or unleavened. The most popular fillings are: 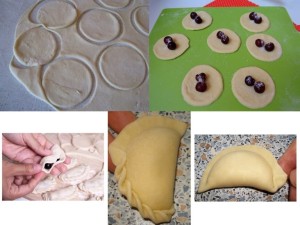 If you are searching for Ukrainian meat varenyky recipe you can use the dough recipe described below. To cook the meat filling you need such ingredients:

Boil chicken fillet or chicken quarter. If there are bones, take them away. Chop boiled meat with a knife or using meat grinder and add salt with pepper. Chop onion, fry it with vegetable oil, and then add to minced chicken meat. 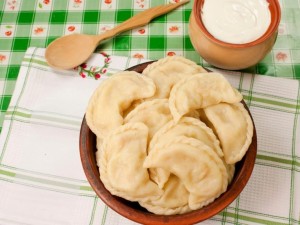 Boil potatoes for 20 minutes and then mash them.  Chop onion and fry it finely on the hot pan with vegetable oil. Add fried onion, butter, salt and pepper to the mashed potatoes. Mix all ingredients.

Cottage cheese vareniki recipe depends on what dish you want to cook, a hot dish or a dessert.

There are two variants of cottage cheese varenyky fillings, sweet and salty. 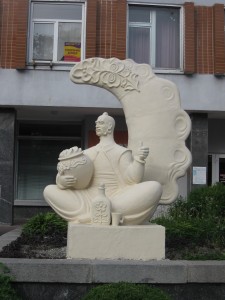 Ukrainian blueberry varenyky recipe is similar to recipe for cherry vareniki, as well as other berry filling recipes. The cooking technology is the same, so these two recipes can be unified.

Remove kernels from berries (if there are any). Add sugar and starch, mix ingredients. Put two or three berries per one dumpling.

In Ukraine vareniki is not just a national dish, but also a special talisman. Many years ago Ukrainian peasants believed varenyky brought them abundant harvest, so they took their miraculous dumplings to the fields.

In the ancient Slavic period women used to eat varenyky on the second day of their wedding, as a symbol of wellbeing and wellness. Vareniki were also given as the medicine to pregnant women.

In 2006 the first Ukrainian Varenyky monument was established in Cherkassy. The statue was a Cossack  Mamai with a bowl full of Ukrainian dumplings.

Another monument to honor the Ukrainian symbol was established in 2009 in Synky village, Kirovograd region.